The spread of E-V22 descendants reaches a wide span. It’s like a T zone.

Vertical: Egypt and the Southern Levant in the centre and Southwards to Horn of Africa. This is the oldest spread with the highest percentages up to 88% of the Saho in Eritrea.

Horizontal: From Portugal in the west till Pakistan in the East, modest or low percentages around 5% (but mostly beneath).

Spread to the Levant

E-V22 spread from the Western Desert heartland (nowadays 30% ) to the Nile Delta (nowadays 14% ) and into the Southern Levant (nowadays 6,9%). The Levant corridor is one of the oldest “hubs” of human kind. From early on it’s an important bridge, with bidirectional movements, between Northeastern Africa and Southwest Asia.

The migration of E-V22 into the Nile Delta and the Southern Levant is associated with the different Neolithic cultures of the Nubian/Egypt area and in the Southern Levant. The Nile functioned as an ancient highway also for migrating people.

Argonauts of the Gulf and Mediterranean

Image of Neolithic ship in the Gulf:

The Neolithic of the Levant was close linked tot he Ubaid culture in Mesopotamia. Alicia M Cadenas (2008): “Recent archaeological finds supports a trading relationship between Mesopotamia and the Arabian Gulf region dating back to the Al Ubaid Period (~7000 ybp) as evidenced by the excavation of Ubai pottery from Mesopotamia in UAE. Ancient maritime trade routes linking Mesopotamia to the Indus Valley included Dilmun (the island of Bahrain) and Magan (in the southeastern tip of the Arabian Peninsula). It is possible hat the close ties between Mesopotamia with both the Nile River Valley and the ancient Persian Gulf region during the Neolithic helped disseminate these haplogroups.” 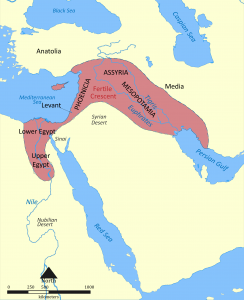 “The majority of the UAE M78 representatives belong to the E3b1a3-V22 clade (6.7%)…ts dispersal may have occurred early, the first to spread the E3b1a-M78 chromosomes to North Africa and then the Near East.” E-V22 in the Arabic Peninsula is mostly characterized by the subbranche E-L674.

For the Mediterranean area I see a similar development. Paschou (2014) stated that a“maritime coastal route was mainly used for the migration of Neolithic farmers to Europe”. In other words, there was a certain kind of island and coastal hopping of Neolithic colonist. 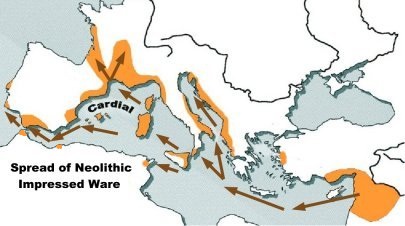 Followed by Voskarides (2016): “E-V22 and E-M34 are common in the Southern Levant, Sicily, Algeria, and in Egypt and rare in Europe. These lineages, like J2b-M205, could mirror a Pottery Neolithic movement to Cyprus from the Southern Levant (Pearson R 2 coefficient of correlation of E- M34 to longitude: 0.164, p = 0.003)” On of the earliest spread to the Mediterranean is the the so called Impressed (or Cordial) Ware (7000-5500 ybp). The spread to the Mediterranean could be in several waves up until the so called Phoenicians (3500-2500 ybp).

The spread in Europe “above the Alps”  is very rare and most probably an offspring from (the hotspots in) Southern Europe.

In several ways the Jewish diaspora could also play a part of the spread of E-V22. The Levis tribe of the Samaritans is an example of E-V22 rooted in the Levant. There were also (large) Jewish communities in Alexandria (Nile Delta) and also in Elephantine (Nubia).

Constantinople was also a Jewish stronghold; the Jewish community of Kiev is in a certain way derived from the Constantinople Jewish Community. Through Kiev Jewish E-V22 is spread into Eastern and central/western Europe (Ashkenazim). 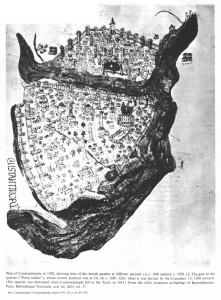 Southwards: the heirs of Kush and pastoralist in the Horn Africa 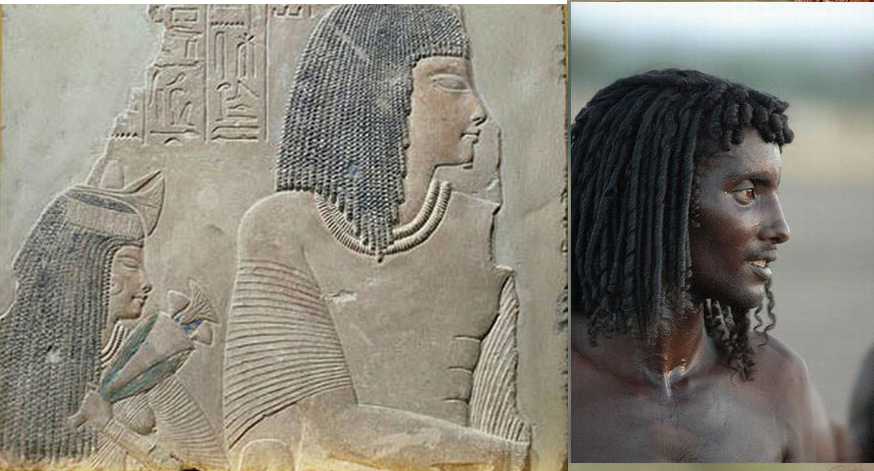