Where did the old patriarch of E-V22 live? Our clue is that we must go to North Eastern Africa, borderland nowadays Libya/Egypt. This is the so called Western Desert.

This land wasn’t always as hot and dry as now it’s the case. In history humid and dry phases alternate.

E-M78 in the Western Desert

Why do we assume that’s the place? E-V22 is a subbranche of E-M78, originated about 14.000 years ago (y-full). In 2007 Prof. Cruciani stated that the origins of E-M78 lay in the Western Desert (Egypt/Libya). This is recently confirmed by prof. Trombetta e.a. (2015) they claimed: “a northern African location is favoured for the node defining the M78 sub-clade (posterior probability = 0.76), supporting the previous hypothesis of Cruciani et al. (2007).”

In the four maps above we see the spread of the population in the different dry and humid phases in the history of Egypt. The movement from the first map (A) to the second (B) reflects the opinion of Battaglia (2009). He wrote: ‘A recent archaeological study reveals that during a desiccation period in North Africa, while the eastern Sahara was depopulated, a refugium existed on the border of present-day Sudan and Egypt, near Lake Nubia, until the onset of a humid phase around 8500 BC (radiocarbon-calibrated date). The rapid arrival of wet conditions during this Early Holocene period provided an impetus for population movement into habitat that was quickly settled afterwards’. In the humid phases of map B and C the haplogroup E-M78 spread around the whole Western Desert. In these phase E-M78 was according to the analist of Yfull.com mutated to E-V22 (9900-7200 ybp).  So the old patriarch of E-V22 is to be placed in the Western Desert. E-V22 is with 22% of the population in Bahariya (Western Desert) the highest of whole Egypt (14% in the Delta).

Illustration: rock art (the cave of swimmers) at the Western Desert in the onset of E-V22: 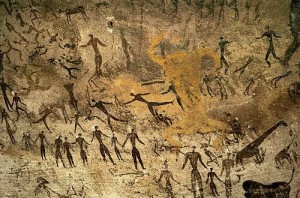 The humid phase in 5600 BC (7600 ybp) was followed by a desertification of the Sahara, spurred the migration tot he Nile. This corresponds with the Neolithization of Egypt at that time: ‘In the Nile Valley, the Saharian met and mixed with the descendants of the South Western Asian Neolithic population responsible for the introduction of the Southwest Asian agricultural tradition into the Nile Valley….’ (Peter Bellwood 2005).

Allison Smith (2009): ‘The prime Northeast African haplogroup E candidate related to the arrival of farmers and/or pastoralists from the Levant is undated E-M34. E-V12(xV32) and E-V22 may well represent local adaptation.’

Neolithization: founder effect along the Nile

The changing weather conditions, people moving to the Nile, and starting with forms of agriculture and sedentary life style counts for the whole area (situation D). Along the Nile within a relative short time, a few hundreds years, there where 7 mutations (subbranches) within the E-V22 markers (Y2530_2 and PH2818). This occurred about 7300 ybp (totally accords with the situation D). The migration from the Western Desert to the Nile and the development of a new kind of life style are mayor triggers for the different mutations of E-V22 and the founder effect of it.